We are looking for certainties within a sea of ever changing data
AMID evolves into a stage installation, where costume-mask, sound, light, and visuals provide sensory stimuli, highlighting various aspects of the space - moments and functions that seek to emerge through the body. These functions weave a network between the body and the space, shaping their ever changing structure. It is like a living, sculptural woven fabric that moves in and around the body and the space, reflecting their shapes in its weave.

The choreography  is structured through a series of episodes where calm and silence, bliss or anxiety, a tropical or frozen atmosphere can be revealed. It is a reflection and study of the exchange of the two worlds: the interior with the outside, the virtual with the real, the past with the future. An attempt at visual and acoustic reconciliation of mentality and poetry, where the function and the lacking occur in the aithēr*
* in Homeric Greek, aithēr means "clear sky." The existence of aithēr has been formulated from antiquity up to the nineteenth century and was reworded in the 20th as the hypothetical "field of everything’’.
1-2 & 8-9 APRIL 2019 at 21:30 | Theatre ROES / Athens

AMID is the second work of Chrysanthi Badeka’s choreographic research based on the topic what remains?. The title of the project derives from the term amidst. This term acts as a structural element of the idea, since AMID was born in the first work of 2016 and  was developed through transmedia ways amidst other projects. Today it is presented in the form of a multimedia dance performance, in collaboration with a group of independent creative-collaborators. The exploration was focused on the concept of the limits of the Inside and Outside and the function of the reflection, in which we perceive in some way the exchange of the interior with the external world.


ABOUT THE CREATIVE TEAM

In AMID, the term amidst was also applied as a personal practice of shifting towards each other's different artistic disciplines. As a multimedia production, the creation of a new network of communication and function was necessary for the fruitful conciliation among the creative collaborators. Focusing on the transmedia way of thinking, interdisciplinary independent artists were invited to join the group, having a common characteristic : their interest and their experience with the human body and movement.

The collaboration arose from the common need between Chrysanthi Badeka and Mette Sterre to explore how a costume-mask sculpture can create new ways of movement in the human body, giving the mask costume a key role to the dramaturgy and the development of a choreographic project. Both makers have explored how the term amidst applies not only to the content, but also to the implementation of the idea. Taking as a fact, how demanding a multimedia production is and the recognition of feedback and reflection as functions that play a key role to the mechanisms of collaboration, a modular way of working by distance was developed. Continuous exchanges and updates were carried out through social networking platforms (fb, skype, what'sapp), filming was used as a documentation tool for visual communication of the production stages, and 4 residencies took place between Athens and Amsterdam. The result of this collaboration is presented through the multimedia dance performance AMID and a backstage dance documentary.


AMID dance performance takes place with the financial support of the Greek Ministry of Culture and Sports
and  the support of Stimuleringsfonds for costumes and mask. 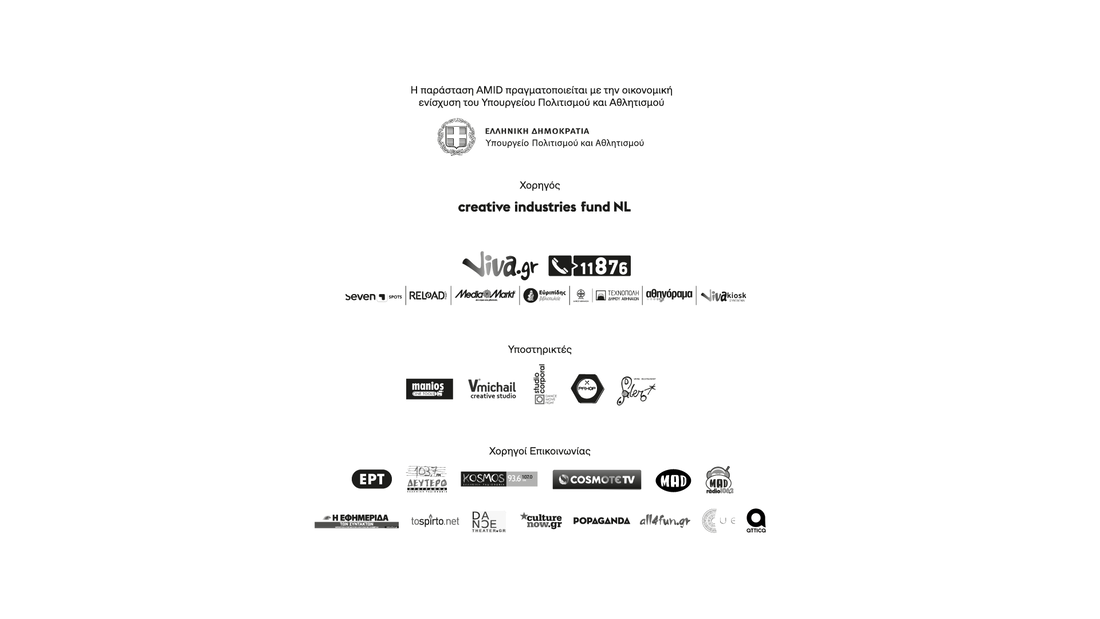